Cruise to Limerick for RiverFest, 4 – 6 May.

Six boats travelled to Limerick for this cruise Passade, Amergin, Jack Sparrow, Serenity, Sally O’Keefe and Sheeaun. Most of the boats left Kilrush around lunchtime on Saturday and got a favourable tide all the way to Limerick in good weather and light winds.
We had a few sundowners on Amergin before going to the pub for nourishment. After a leisurely day on Sunday there was a group dinner in Dolan’s followed by some late-night drinks on Sheeaun.
We had an early morning departure from Limerick docks as the harbourmaster threatened to close the gates earlier than originally communicated. A very enjoyable sail in light winds got us back to Kilrush by mid-afternoon. Michael Harris, crew member on Amergin produced an excellent photographic record of the weekend.
​

​Five boats left Kilrush on Saturday 7th September and arrived in Fenit marina around 18.00 after a very pleasant sail in sunny weather. (Passade, Saronya, Serenity, Amergin, Sally O’Keefe) Raparee also sailed separately to Fenit and joined our company. After a short walk across the causeway to the West End Restaurant, we had a very enjoyable dinner followed by a few drinks and yarns in the bar afterwards.
After a leisurely morning the group set sail back to Kilrush arriving on Sunday evening. The weather for the return trip was not so nice with drizzle and poor visibility.

​After our very successful October series we were determined to get a bit more out of the season before lifting out the boats. Three boats left Kilrush on Saturday afternoon in a fresh breeze from the W. Passade, Amergin & Kitty). It was almost dark when we tied up at the pier in Carrigaholt. A few hot whiskies on board Amergin thawed us out before walking in to Carrigaholt for dinner in the Long Dock. As usual, the food and the craic was great. After dinner we moved the short distance up the road to Carmody’s for a few beverages to finish off the night. On Sunday we had a very enjoyable sail back to Kilrush with a favourable breeze. 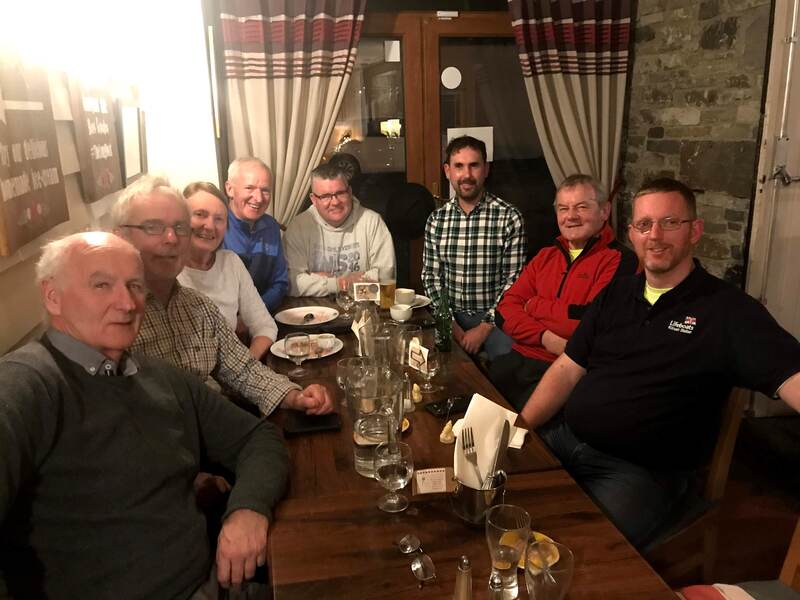 ​Three boats from the RWYCI (Passade, Sheeaun & Amergin) sailed to France in July to join the rally organised by the GBSC. All the boats met up in the Ile de Groix and after two very lively and entertaining nights there, a flotilla of 27 yachts (23 Irish) sailed the short distance across to l’Orient. A warm welcome was laid on by the local yacht club and town council. Padraig Larkin who owns two pubs in l’Orient also took good care of us. We had a great few days in l’Orient with plenty of music, singing and dancing, before the boats started to depart for home or cruising further afield.